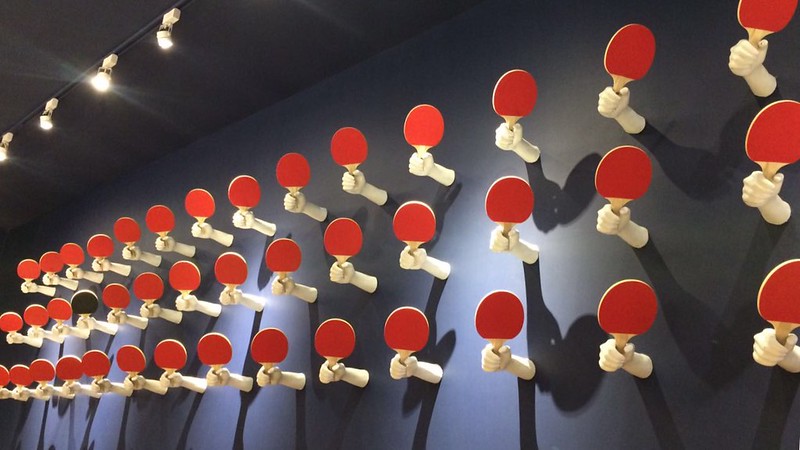 From the Tasteless Food Group comes yet another game changer offering Progressive Chinese-American cuisine. Ping Pong Diplomacy bridges not only cultures, but also the divide between traditional and modernist Chinese fare. Restaurateur Charles Paw’s idea for this new venture in SM Aura Premier was to go beyond combining Chinese and American cuisines. Rather, redefine classic Chinese-American dishes with the introduction of new ingredients and styles.  In effect, Paris-trained Chef Noel Mauricio and ramen visionary Chef Him Uy de Baron combined their culinary training and personal interpretations of Chinese and American dishes to create a progressive menu. 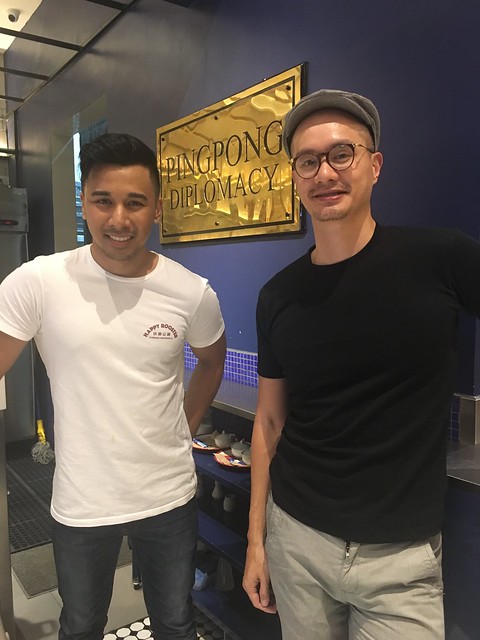 History buffs might easily make the connection between the restaurant’s name and the cuisine it offers. For those who aren’t too keen on past events, the exchange of table tennis (ping pong) players was the United States and China’s first attempt at bridging the divide after the 1970s Cold War. This historical collaboration served as an inspiration not just to Ping Pong Diplomacy’s catchy name but also to its Chinese-American influenced menu.

Ping Pong Diplomacy’s progressive Chinese-American menu includes Rice and Noodles, Small Plates and Big Plates Specials.  Each plate was seemingly created to tickle diners’ tastes and curiosity. First on the intriguing menu was Cold Shrimp Salad.  The plump shrimps were laid on a bed of Szechuan puffed rice in light coconut dressing and crab fat ice cream.  Hungry diners could easily mistake the refreshing starter as a viand, as some of us eagerly paired the coconut milk infused shrimp with fried rice. After finishing the fresh shrimp, you may want to slurp what’s left of the dressing or pour it over rice.  We did the latter – don’t judge us! 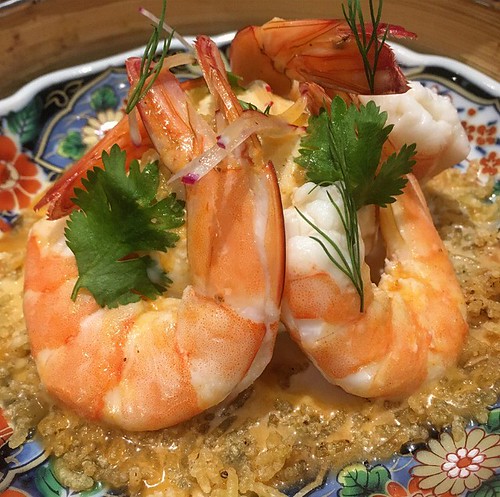 The next Small Plate, Crunchy Eggplant, looked too pretty to eat. We were almost too careful in taking photos so the intricate tower of battered eggplant with fragrant sauce and prickly ash wouldn’t crumble. 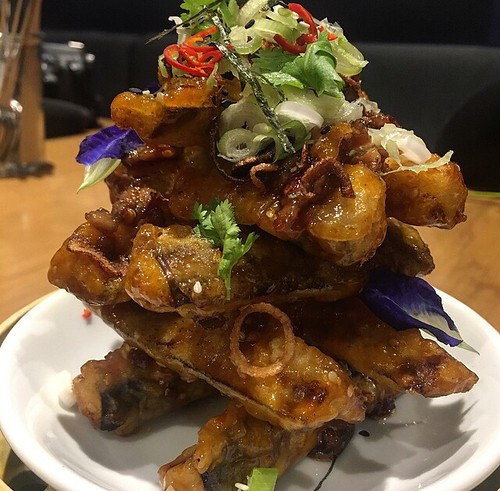 We fought over each piece of eggplant like competitive ping pong players and nearly forgot the plate of Simple Fried Egg.  The idea of frying eggs, scallions, pork floss and oriental sauce to a golden crisp might seem simplistic, yet the burst of flavor in this simple fried dish was simply delightful.  If it were that simple, how come we haven’t tasted this egg permutation elsewhere? 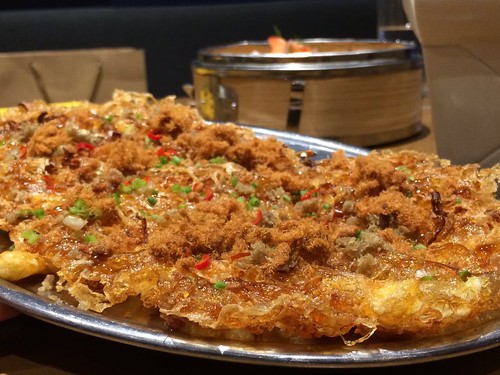 Noodle dishes are staples in Chinese restaurants, but what is a progressive Chinese restaurant without its own take on the classics.  The Lump Crab Scallion Oil Noodles has at least three important Chinese cooking ingredients:  crab meat, scallions and noodles.  The noodles came in a nifty ceramic takeaway box, but don’t think it’s only good for one. 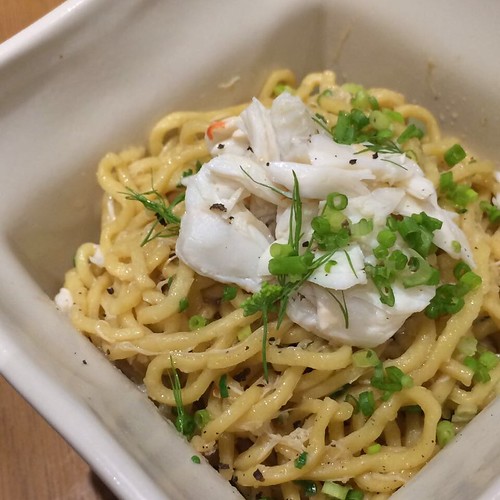 Another staple food with a twist was Chopsuey.  In place of baby corn, they used corn on the cob and mixed it with other grilled vegetables and fresh red radish. 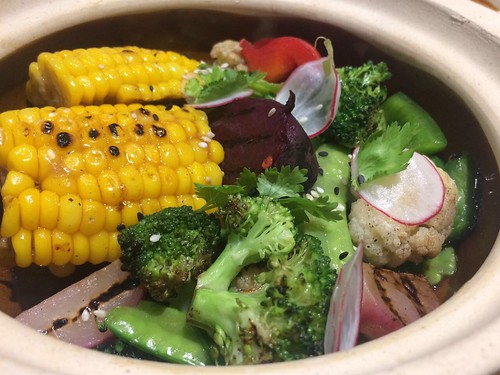 The Small Plates and Noodles were all savory starters that left us wanting more.  Perhaps sensing our seemingly insatiable hunger, a server decked in a U.S. Chinatown graphic tee brought us the first Big Plate, Sweet and Sour Pork.  Fried pork spare ribs, pineapple chunks and roasted apples topped with a cinnamon stick.  Finally, a perfect match for the Yang Chow Fried Rice we unabashedly paired with salad early on. 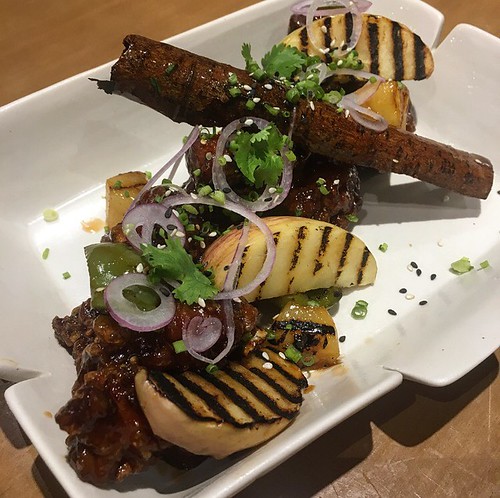 Despite the restaurant’s vision of veering away from the ordinary, they offered Soy Lacquered Chicken with orange and cinnamon like in most family-friendly Chinese restaurants.  A classic dish that might be enjoyed by those who prefer traditional food to modernist fare. 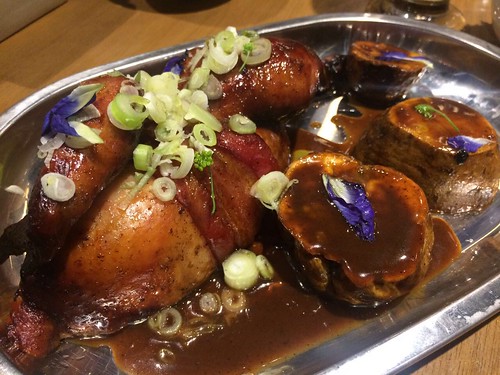 When we were halfway through wolfing down the chicken dish, Chef Him sauntered towards our table to talk about his favorite item on the menu.  As if on cue, we were served Steamed Sea Bass in ginger soy and savory garlic sauce.  We immediately understood why Chef Him talked about this dish with such fondness.  The fish was delicately seasoned and was unpretentiously delicious.  The succulent sea bass dish can undoubtedly give meat entrees a run for their money. 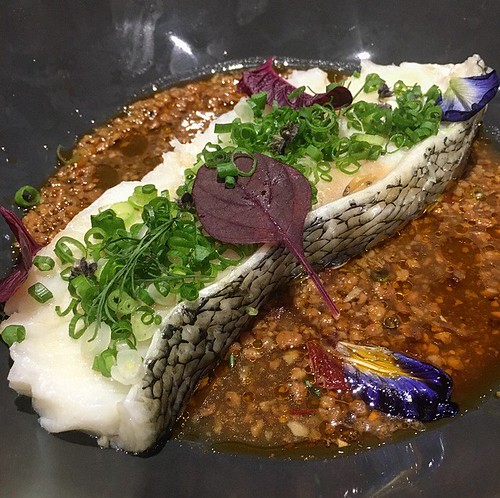 Just when we thought we could go without meat, along came the Braised Beef Curry Casserole.  We were forewarned that the slow braised beef, cheddar cheese and sweet potato gratin is one casserole we would be fighting over.  True enough we were in what seemed to be a silent war for minutes as each one of us quietly savored the flavorful but not overwhelming beef casserole. 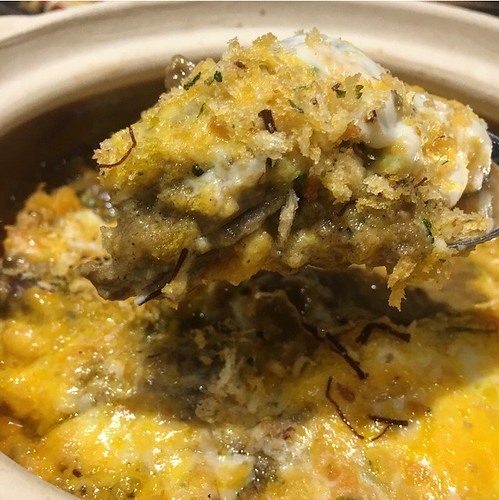 To further convince us to return back to meat, we were given the last of the Big Plates, Sesame Beef and Broccoli.  In psychology, the “peak-end rule” says that experiences are all about the ending.  This could explain why the Black Angus steak with marbled potatoes and grilled broccoli in sesame sauce turned out to be most everyone’s personal favorite.  And how we would always look back at our time in Ping Pong Diplomacy fondly. 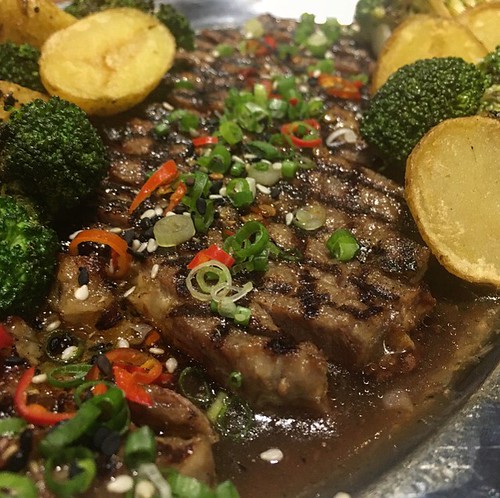 When most of us were ready to step out the seventies American Chinatown inspired restaurant, we were all handed takeaway boxes.  Much to everyone’s surprise and delight were the Golden Macau Egg Tarts.  The croissant-style flaky crust impeccably complimented the smooth custard, and is definitely a perfect way to end any meal. 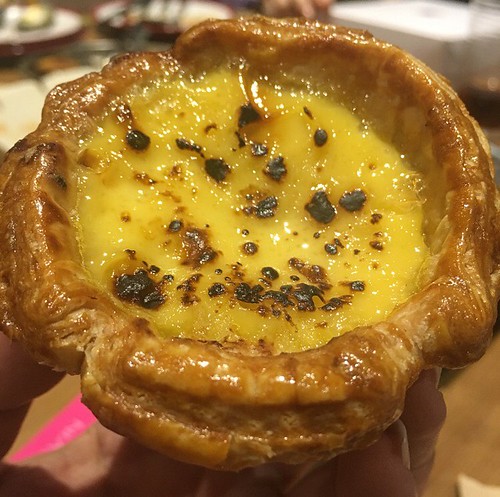 Stimulate your taste buds and satisfy your curiosity for progressive Chinese-American cuisine only at Ping Pong Diplomacy.  Bridge the divide within your family or friends over fun fusion cuisine.